When I visited Penang way back in 2007 my three month old pregnancy accompanied me. Para sailing was totally out of question. During our Langkawi trip, when I came across the same in Pantai Cenang beach it was kind of irresistible. There are things in life which you should try whenever an opportunity presents itself. After all , no clock - historical, biological or plainly logical is going backwards right?

It costed us RM100 per person. There were more expensive options in other parts of Langkawi(nearly 50 to 100 RM more). I guess the slight difference lies in the amount of professionalism but we decided to opt for the cheaper one.

My husband and I decided to go together. They strapped a parachute to our shoulders and this in turn was connected by a rope to a boat in the sea.

The man instructed my husband "When its about to end, I will blow the whistle. Then you tug at this rope with both your hands and pull it towards your chest. Remember both hands!" Almost simultaneously he started yelling "Run, Run!" The boat was speeding away dragging us and we ran with as less clumsiness as we could muster. Our feet just touched the water when we felt ourselves being lifted and then we were in the sky clinging on to the parachute. It was amazing! There was a nice breeze, it was quite calm and we seemed to be gently floating. Oh Yeah! The view was breathtaking but we had decided to risk only our lives and not our material possessions on earth like iPhone, iPad or the digital camera. Hence no pictures, just lovely memories of that view.

After around seven to eight minutes , the boat completed a huge circle and started approaching the place on the beach where we had started.

By now, my husband and I were deeply engrossed in some conversation, I cant really recollect the subject now. A whistle distracted me and I slowly asked 'Are they whistling at us?'

The men on the shore were maddeningly waving their hands and whistling at us - Basically signalling us to pull the rope as instructed. 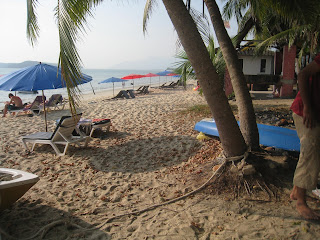 Now we forgot the 'Both hands' part and my husband proceeded to pull it with one hand. There was no noticeable difference in our stand! Then I remembered 'Hey both hands'.

This whole act is to maneuver the parachute to move it towards the land so that when we descend we would end up on the shore and not in the water. On using both hands we moved towards the shore and by now we were only around 10 to 15 feet above the ground. A man was seated at the beach and thanks to his stars that carefully guarded him my feet just managed to avoid giving him a solid kick on the chin.

When we reached the ground it was one of the best sights of the day for those at the beach. I toppled and fell, my husband toppled and fell over me and the parachute fell on us. Almost immediately the men came and helped us out of the tangle!

It totally lasted only around ten to fifteen minutes, but was an experience that I would cherish for life! As I said, don't have any images, just one of the beach.

One of the major attractions of Langkawi is the cable car ride , a very steep one that takes visitors to a Sky Bridge atop the Mount Matchinang.

When we went the sky bridge was closed for renovation but we did go up the viewing decks. Beautiful views from there and a bad choice for people scared of heights. 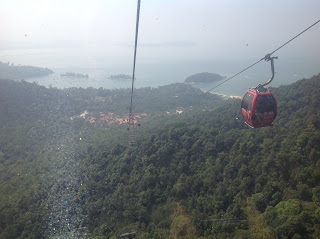 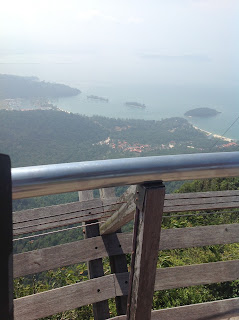 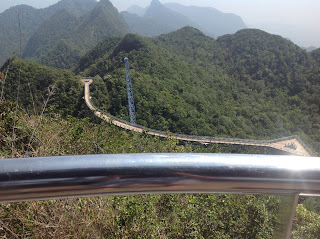 The Eagle Square is a landmark in Langkawi in the city area next to the ferry terminal. A huge statue of an eagle stands overlooking the ocean. Nice place to take some lovely photos and a good view in front.

We went when it was very hot just before taking the ferry to Penang and hence did not linger too long but it one goes in the evening or so , it would be pleasant and more enjoyable. 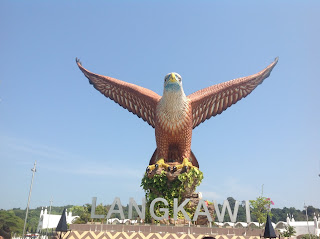 Posted by Jayashree Srivatsan at 8:03 AM