A very happy Onam to one and all. 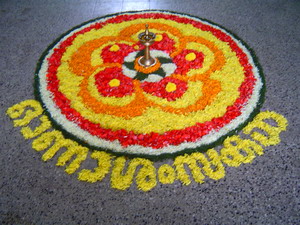 Having spent the first decade and a couple of more years of my life in Kerala, the word brings on a tumultuous onslaught of memories.

Onam always announced the arrival of the first set of holidays for the academic year with the Quarterly Exams safely behind us in history. Being Tamilians, Onam was not a part of our religious agenda of celebrations. Nevertheless we did pitch in with our neighbours in some of the festivities especially the pookkalam (floral carpet) outside at the entrance. My mother would not compromise on the rice flour kolam she would draw outside 365 days a year. It actually helped as we would have a readymade design that she would have already drawn and we just had to fill it with flowers.

Our house had quite a few trees, but not many floral plants, and hence there was a real dearth of flowers. I remember once walking to my neighbours' houses, requesting permission to pluck flowers. I still remember the delicate expressions their faces carried, knowing not how to politely refuse the request of an overenthusiastic child, as they needed the flowers for their own Onam decorations. My father as always pampered me, buying flowers for me on his way back everyday. Those were definitely better as there were a very colourful eclectic mix.

The last four days of Onam including the main day were state wide holidays. My father, a lover of travelling, wanted to show his wife and children as many places as he could and made good use of the opportunity. Two of my cousins who worked then in Kerala would come home and we would set off somewhere together. Ooty, Kodaikanal, Goa, Mangalore and surrounding places are some that we visited. Oh!! Those were the times!! 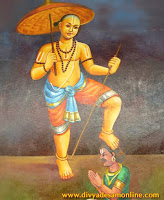 The legend I heard of as a child of the king Mahabali visiting his beloved subjects confused me. Mahabali, the ruler was so righteous and great that there was absolutely no bad things happening during his rule. Hence the Gods wanted to end it as there was an imbalance on Earth and approached Mahavishnu who took the Vamana avatar and managed to send the poor king to the underworld. Why are the Gods being so mean to him? He is only being good isnt it?was something that I kept looking for answers.


We once had a Pookkalam competition in the school where every class had to make the floral designs.  After the results were announced, we lined up and headed back to our classes.While 5A stood admiring their work of art and taking pictures around it, we the little hooligans of 5B happily played, kicking the flowers towards each other and damaging the design beyond recognition(We were in a girls only school hi hi) . Our teacher came back to chaos, with flowers strewn all over the place, undone plaits and unruly hair on our heads and absolutely no trace of our creation.  The worst part happened when she was giving us earfuls left and right. I have no idea what triggered it but she was scolding us and I laughed at her face. You can imagine the repercussions that would have carried.

Coincidentally a photograph of this class 5B got posted by someone on Facebook yesterday. God bless the website for bringing about nostalgia all over the world.(To hell with its negative effects)