I remember the day when he was in the ICU of Appollo hospitals after having suffered two heart attacks. He had ventilators and other tubes running through his mouth and nose due to which he could not talk. The rest of the family was allowed half an hour's visit during which he communicated to us writing on a piece of paper. He wrote 'My daughter is my life and soul'. That was in 2009.After a by-pass surgery he was with us for a year and a half.

Today as I write this I keep getting reminded of that day. In memory of my Appa, I dont know whether to call it poetry or prose - I just wrote what I felt like

The hands that held me
The day I first cried
Are gone !
The eyes that cautiously monitored
My steps tiny and big
And always welled up, manliness aside
Every time I had to depart
Are gone !
Advice ,Comfort ,Wishes, Blessings
The voice that gave it all
Is gone !
I lean back and I fall
As my pillar of strength
Is gone !
My Inspiration,
My Role Model,
My Friend, Philosopher, Guide
All Gone!
I miss you pa,
I miss you terribly;
There's nothing I can do.
I am helpless,sad,frustrated;
There is a void inside,
Very deep!
Its very painful;
Nothing can seem to fill it.
Every man loves his daughter-
But no man can shower
Any more love than what you did.
I look back and I see
An epitome
Of selflessness and unconditional affection

'Jai, Kutti' I hear an imperceptible voice
Its inside of me, its my dad - To me;

'I am still there

I am in
Every cloud that adorns the sky;
Every butterfly that flutters by;
Every gentle breeze brushing your face;
Every ray of sunshine enclosing you in warmth
Every dew drop that kisses you;
Every breath you inhale;
Every flower that smiles at you;
Every fragrance that wafts in the air;

I am there!
Always around -
Caring , Loving , Protecting'.

Wishing my Appa peace and bliss wherever he is, in whatever form!!!

I love you appa!
Posted by Jayashree Srivatsan at 8:29 PM 36 comments:

Mr. Steve Jobs is posthumously causing a major impact in my life.Not directly, but through one of those rectangular things he gave to the world called I-phones.
It's not just me obviously- the entire planet has been infected with the smart phone addiction . I look ahead in the train and lo- eight out of ten people in front are glued to their phones - Facebook, games , mails, browsing and God knows what else. Well yes ,even I, am typing this post using one! At office team lunches, meant to bind the team together people seem to be talking more to their phones than to each other . Even if they do manage to talk it's usually about some app that caught their fancy!
I did not start with this post to discuss the global impacts of smart phones. So coming back to my case- My 3 year old seems to have developed an obsession for this possession of mine . No habits of kids come out of nowhere. It all has a source and usually it's the mommy or the daddy. This one's no exception !
Well it all started when my son got a sudden interest in circus acts and started jumping from a moving stroller . ( I can almost hear the 'what's the big deal ! It's only a stroller not a train') . Well you will know it when you have to face it . To make him remain seated I resorted to You-tube on my phone and played some of the so-called-oh-cho-chweet videos like Lion King . It worked!
Then when we went to India I strategically loaded some of his favorite videos on my phone. Y? Flashing back to my last trip -
The air hostess completed the umpteenth demo of flight safety guidelines and made sure that all seats were upright. The pilot made an announcement requesting them to assume their takeoff positions. As the wheels began to spin at jet speed V released himself from the belt,stood up on the seat with his arms spread wide like a politician in an election rally and started singing Mgr's 'ore vaanile ore Mannile ore geetham urimai geetham paduvom' .(translates to we shall sing songs of rights in the sky and earth that are one) - waving his hands like a conductor of an orchestra !

Now you know why I needed a strategy.

V used to love the Talking Tom app . Every time that cat talked back he used to erupt with squeals of laughter.

Who does not like seeing a child laugh ? This resulted in the download of various apps that entertained him .

Earlier my husband or I were showing these to him and he would run to us, phone in his hand, with a big grin showing his tiny teeth and saying 'Animals parkkalaama' (shall we see animals) in his baby voice !

Later one day I found my little brat opening the ipod app on his own and deftly moving from one video to another . Boy!wasn't I proud ? And typical dialogues ran in the family 'Kids these days! Born with iPhones and iPad's ' .
Now my kiddo's familiarity with my phone has grown by leaps and bounds. He skillfully moves his tiny fingers like an artist at work and navigates with ease from one app to another - video to game, game to song , song to iPad ! And his favorite of late is You Tube.

In the course of learning he keeps rearranging or sometimes deleting my apps.

One day I got back home after work and was thrilled to see little one come running towards me.'O Darling! U missed me so much!' I exclaimed and stretched my hands out expecting him to run into my arms - he took the phone from it and went and sat on the sofa! Well darling missed my phone so much !

These days, his first words in the morning are 'where is amma's blue phone'
He has also started expecting everything to be touch-screen. I was browsing the net one evening on my laptop; he came, sat on my lap and tried moving my desktop icons with a swish of his hand! 'To him this is outdated technology' my husband exclaimed.

The best was yesterday . I had hidden the phone from him and had placed it high up on the cupboard.A friend called. As I was speaking he kept following me like a puppy and repeating 'ok bye! Ok bye!' with a cute tilt of his head - translating to 'mama, say ok bye and hang up' . With all the innocence on earth i thought that my son was craving for motherly attention and did not want me to be wasting my time chatting on the phone! The moment I had hung up, like a lightning flash he grabbed the phone from me and quickly ran off to what for him was a safe corner where mummy won't pester him !
I am sure he will lose interest in course of time but for now he is crazy about m(I) phone!

Posted by Jayashree Srivatsan at 7:20 AM 14 comments:

Mohan walked out through the huge iron gates, hands in his jeans pockets. His gaze was directed at the ground, his look forlorn and his stride slow. This had been his thirty-fifth audition; A failure like its thirty four predecessors.He stayed in a rental room on the terrace of a house in Chennai’s Kodambakkam area. Unaware of the bus he boarded, and which way he walked he managed to reach home totally lost in his thoughts.
He climbed what was now left of the steps leading to his room and knocked on the door.“Hey! What happened?” Saravanan who opened the door asked as he entered.
The recognition of a known face and voice plummeted him to the present .
“Wh…What??”“What happened?”
Mohan let out a huge sigh and said “They want a macho muscular man, not me!Its Six Packs era now!”
“But director Kalaimaran makes realistic movies with good actors.”
“Used To. Now he is working for a producer who wants to make an all-in-all commercial movie. His own son is the hero. The audition was for the villain part. They want a new face.”
“Oh!! I heard that producer Devendran of Delta Movies is launching his son. It could be this one. He had produced two of Kalaimaran’s earlier films. Hmm!!”
Mohan slumped into a plastic chair at the corner, the only piece of furniture in the room.
“Don’t get too upset da. You know its not easy to get a chance in this industry. If they did not take you its their loss. Something better is on its way. Let me make some tea.” said Saravanan and proceeded to boil some water on their kerosene stove.
Mohan reminisced through the earlier events of the day. The director had not even thrown a glance in his direction.
The assistant directors who were doing the first level filtering had sent him away with a ‘Better Luck Next Time’. He loathed those words now.

Went on a trip to India and could peep into neither my own blog nor those of others for nearly ten days.
Baisakhi Temple: 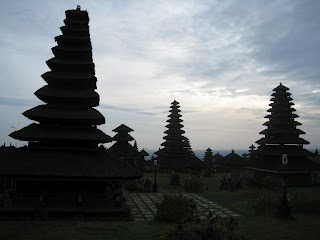 The Baisakhi temple , also known as the Mother Temple, is situated at the foot of Mt Agung, an active volcano . The temple survived unscathed during an eruption of the volcano in the 1960's and hence it is highly revered by the locals . The volcanic rock used for the construction gives the structure a unique black shade .It comprises of 7 ascending levels, the 7th most being at the summit of the mount and hence not accessible to the regular tourist.There are three main temples here dedicated to the trimurthis Brahma,Vishnu and Shiva. Exploring the temple's premises involves a whole lot of climbing steps , a point to be kept in mind when deciding to go there . A tourguide can be arranged for around 50000 Indonesian Rupiahs . Our tour guide doubled up as our photographer there and was highly helpful in getting some family snaps .Unlike the temples in India the sanctum Sanctorum of the temples in Bali remain closed throughout the year except on selected days when there is a ceremony in the temple as per the Balinese calendar. 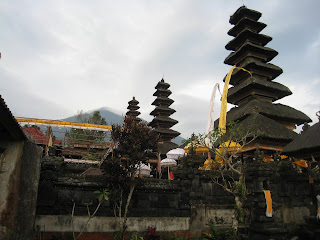 Just like the temples in India, their Balinese counterparts have their own sanctity and some rules. People wont be allowed to enter in shorts. If you are dressed in one, you would need to buy or rent a 'sarong' a local garment worn by the Balinese and tie it around your waist. Also, in all temples there would be a board that women are not allowed to enter during menstruation.

The murals of Shiva and Vishnu within the temple were very fascinating. Shiva with a moustache and mounted on his nandhi, Vishnu with a discus on his Garuda.


Picture Of Shiva In the temple 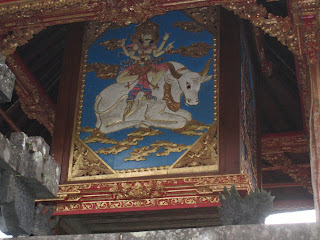 
The Tanah Lot temple is located on the West coast of Bali, beautifully located atop a cliff on the seashore. This temple offers some breathtaking views and is a feast to the cameraman's lens. 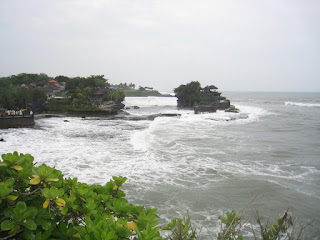 There is a structure located at the foot of the cliff as well. In times of high tide, worshippers just go to this one at the lower altitude. When we went it was a high tide and the waves leapt to heights I have never seen before. Tanah Lot Sunset is very famous. Our guide told us that the Uluwatu temple is similar and that it offers equally great views. As it was a little cloudy we did not stay back for the sun set. Even with the sun perched high up in the sky during the afternoon it was a beautiful experience. 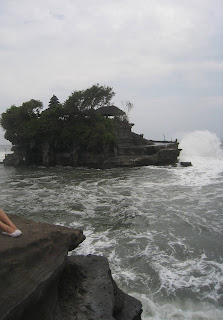 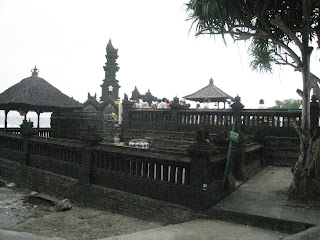 Posted by Jayashree Srivatsan at 12:29 AM 7 comments: