#AtoZChallenge 2017 A is for Apple

I have decided to participate in the A to Z blogging challenge this year.

Initially I did rack my brain a little bit to decide upon a theme. Then I decided to go in the quintessential way we learn the alphabets.

My 3 year old is going to be my topic picker for every alphabet.

And here we go. As it is taught in almost every school in the world (where they teach English of course), A is for apple.

If anyone is given a piece of paper and asked to draw a fruit I think the first thing they would draw would be an apple.I am wondering why!
1) We usually start our learning process with A is for apple and hence its deeply implanted in our heads
2) The shape of an apple is unique and symmetric. Not much drawing skills required there
3) Its easier drawing a perfect apple shape than a perfect circle which could stand for an orange or a melon
4) Size wize an apple is neither too big or too small and its design is quite straightforward unlike a jack fruit or a water melon
5) Apples have the same shape whatever be their kind

I grew up believing apples were red till they started airing an advertisement on TV for a toothpaste. A girl biting into a green apple would get horrified on finding blood along the rim of her bite mark on the apple. Bleeding Gums! Use Pepsodent Toothpaste!

That reminds me of Newton. Wonder what would have happened had he been sitting under a coconut tree or a jack fruit tree! He would have had more significant things to deal with first before wondering why the fruit fell down instead of flying upwards.

When we were returning from our honeymoon in Shimla we bought a box full of apples and we checked it in when we took our flight. After all the harassment, a checked in baggage has to undergo, our box decided to call it quits and ripped open. Imagine our surprise and shock when we found apples rolling freely one after another on the baggage belt!! While others were happily hauling their bags out we were doing apple picking ! ha ha

These days Apple is more closely associated first with the phone than the fruit it was named after. I am sure in a few decades from now there would be a question doing rounds

Which came first , the phone or the fruit?

Looking for you - Flash Fiction

I roamed around here and there looking for you.

I had to give you what I had in my hands. It belonged to you now. My relationship with it was over. I had already absorbed what it had to give me. Now it was time to let go.

You may have received things in the past and yes you will receive in future - some similar, some much better and some far worse. But now does it really matter? What I give may not be a big thing to you...But I need you to take over... for I have other things to do.

Usually you are not so elusive. This time you are making me walk in search of you.

Is that you there? I hope it is. At last I found you.

I tossed the banana peel into the trash bin wondering why this particular bus terminus unusually had very few of them.

Posted by Jayashree Srivatsan at 12:37 AM 7 comments:

The other day I was making up a story for my little girl. I started off with the story of a tiger attacking a zebra.


My son who is an animal aficionado quickly interrupted me. "Amma, but tigers do not eat zebras!"

"Really? I thought they were carnivores. They kill animals to eat them, don't they?" I asked. I was sure he had gotten his facts wrong.

"Well, tigers live only in Asia - in the forests and savannahs of Asia. whereas the zebras live in Africa. So though tigers are carnivores, they do not kill zebras" he explained. That made sense of course.

I had never thought of it that way!

When I was in college I used to have a huge poster of a tiger in my room. There was an inner strength and confidence that I used to get just by looking at that 3 feet image of this magnificent creature.

During our visit to the zoo, we read about the threat of extinction that tigers are facing today.  They are poached for their skin and also for claws, teeth etc. that some believe have medicinal value.  The rate at which their numbers have dwindled is very alarming. I get reminded of the dialogue in the movie Bambi.

Young Bambi: What happened, Mother? Why did we all run?
Bambi's Mother: Man was in the forest.

That one line has so much meaning in it. About the amount of havoc man has caused in nature. Sad!

But there have been consistent efforts to increase the tiger numbers in different nature reserves and wildlife sanctuaries. An article published sometime last year talks about increase in tiger numbers for the first time in a century.


It felt proud to see that India is one of the countries where great efforts are being made for this and which is beginning to show results as well.

Tyger Tyger Burning Bright
In the forests of the night

Posted by Jayashree Srivatsan at 5:56 AM 9 comments:

The eternal curiosities of our questioning minds!

Great thinkers have said a lot of things, stressing upon the importance of questioning, for that is the foremost quality required to gain wisdom.

Well, that applies to thinkers that are great. But what about the mediocre ones like me? I had the irresistible urge to add an "and you?" to that last sentence but what right do I have to make assumptions about someone else's thinking capabilities??Hmm?

I think I always liked asking questions. In my quest to be an active participant in class discussions at school, I have incurred the wrath of many a teacher. Thankfully most of my teachers were committed to their work and patiently answered my queries, relevant or otherwise. There are exceptions of course. Imagine it is the last period of the day and the poor exhausted person wants to quickly get done with the lesson and rush to the one thing that is a solace in his drudgery - his evening cup of tea. Here is a "I want to flaunt my non-existent intelligence" specimen that is throwing questions just for the sake of it! Sensing neither his ire nor that of the classmates eagerly waiting for the ring of the bell I would continue as if I were on the ISRO team that is about to send the next satellite to space.

Fast forward a few years,we started living in the internet era. This is the time, when a few hours spent exercising only ones forefinger on digital devices immerses us in an illusion that we have a string of honorary degrees behind us. This halo behind our heads becomes the most luminous during a visit to the doctor. "Is this contagious?" "Will this fever affect my optical nerve?" "Are you sure its not penguin flu?" We have to pound him with questions to such an extent that he would be seriously considering taking a break, doing a Masters in Veterinary medicine, and start treating those that, leave alone questioning, cannot even talk to him!

The other day I went to the mall and entered a shop. Seeing me browsing, the salesperson innocently approached me to ask if I needed help. Little did he know that there were almost ten blank lines waiting at  the tip of my tongue with question marks attached. After inquiring a lot about the durability, efficiency, trust-worthiness of something that I was about to buy for less than $10 I finally made a choice.  I reached the counter and opened my bag and realized,to my dismay, that I had left my wallet at home. Do I need words to describe his expression or mine?

Then there are those serious questions that society loves asking about our personal lives. "When are you buying a house?"; "Why are you shifting home? That one was so convenient!?" ;"When are you getting back to working?" ;"Why are you working and not taking care of your home?" The list is endless.

Sometimes I feel one needs to carry a board that says "NONE OF YOUR BUSINESS" the moment one steps out from home. It must also have a hammer attached to it that bangs our head every time we decide to adorn the questioner's cap. Oh yes, the one that loathes such questioning does not always stop from asking, The content or context may be different, We all do. The questions we ask may be more aligned with our own beliefs and may or may not be in sync with the general beliefs of our times. 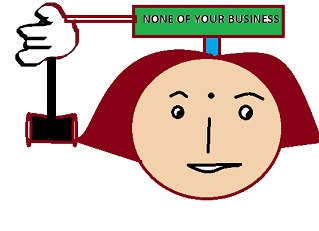 Social media is generally inclined towards criticizing and chastising this nature of the society. But sometimes such questioning may help us to think of our states and decisions from different perspectives. It might trigger a thinking pattern that results in something beneficial for us. Hence instead of blindly shutting ones ears to any queries around us, it may be a better idea to have a filter instead and take to heart those that may make sense when thought about patiently. For the rest we have an easy option of simply ignoring.
Posted by Jayashree Srivatsan at 6:11 PM 19 comments: