I have always been a big fan of animation movies. It does take us into the world of kids and definitely its more peaceful than the world of adults.

I remember watching the Disney movie Bambi as a kid. I also recall feeling terribly sorry and sad when the hunters attack the forest and kill Bambi's mother. Another scene that comes to my mind simultaneously is one from a dubbed Asian movie that I watched as a kid again. This one I dont remember the name, what original language it was in, the actors , the story;Nothing!- All blank. The only thing I remember is the guy telling his girlfriend that his favorite movie is Bambi and that he has watched it 14 times. Why has this stuck on to my memory like it accidentally stepped on some chewing gum? No idea! Maybe the idea of an adult watching an animated move 14 times fascinated me?

I had quite forgotten the detailed scenes from Bambi till I watched it again with my son last year. There is one character who has become my favorite now. Its a little rabbit called Thumper. There is one important lesson Thumper's mom teaches him. 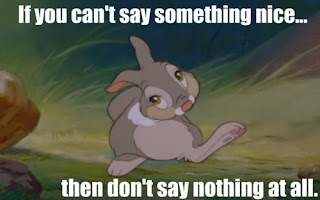 Quite simple and straightforward. But its one advice that can mend a lot of things in the world and in our lives.

The great Tamil work Tirukkural , a literary wonder capturing almost every facet of life in beautifully coined couplets has a line

A wound caused by fire may heal but never will a wound burnt by a tongue.

A lot of arguments and fights happen, especially in families and social circles, about what someone said during a conflict, rather than the conflict itself.  I think the solution is to just swap the intensity of our sensitivity. We need to be more sensitive about what we say of others and less sensitive towards what others say about us. I don't mean to say to project deaf ears when someone gives us good advise or tries to correct something. If something is said purely with the intent of causing hurt, it could be best ignored.