Mommy and Sonny Visit the BirdPark

Last Sunday my husband was  not in station and it was just me and sonny at home.

My whole family truly believes that the most heinous crime that can be committed against me is asking me to sit all day within the confines of the four walls of the house.


V was actually busy and content.You simply do not get bored when you are three and a half and you just dont need a reason to be happy. An ant on the floor can give as much pleasure as a visit to Disney Land. 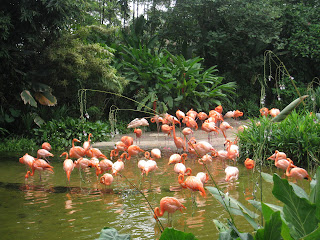 Hence though I declared to the big bad world that I was taking him out as he was getting bored, it was actually my own boredom I was escaping from.

Anyways, I have mentioned in some of my earlier posts about my son's addiction, craze or whatever you may call it to fauna. If there is anything that fills him with absolute glee its the sight of birds or animals.


With due consideration to the above fact, bird park was the choice as its close to my place and I decided to take on the herculean task!(Herculean? If you are wondering why, you need to take care of my little fellow for a day. Or for that matter any kiddo in the 3 to 4 yr range.Believe me, it sounds a lot more easier than it is!)

The weather-God smiled upon my quest to spend some quality time with my little boy and made sure that there were no irritating and troublesome downpours.It was bright and sunny throughout.

I just let the day go, moving in the directions he wanted to the tune of his childish pleasures.Whatever he wanted to see, however long it took!

I realized that a simple thing like a hornbill flying from one branch to another could be the source of innocent pristine exuberance.


Every now and then he excitedly pointed at little things that he observed which were huge in his world...."Amma, the feather of the Pelican fell into the water. We need to stick". Luckily he did not insist that I had to stick it back immediately!

He spent almost three quarters of an hour simply watching the storks as they kept wading in the pool trying to find some fish while I sat on a bench nearby observing him. I doubt if any of us adults can get so much joy out of a simple scene as that!


Sometimes, its imperative that we take some time out and be with kids as kids. Just let them be themselves and relish in those little moments.Laugh when they laugh, run when they run and share a cone of icecream .They deserve it and trust me , the happiness it gives can be equated by nothing on earth.


There is a place called Lory Loft in the Singapore Bird Park. Its an enclosure for a flock of very colorful birds called lorries and visitors can feed some porridge-like substance to the birds which can be bought nearby. The last time we went , he was hardly two years. Then I was carrying him and he watched with curiosity as we adults fed the birds. This time he declared 'Vidyut give mum-mum(rice) to the birds' and he took the bowl from me and proceeded to feed his feathered friends. There are some subtle moments in life when the realization dawns on us that 'Boy, he is growing up!' . And I beamed in pride as I watched him carefully feeding the lorries without getting scared or spilling one drop. 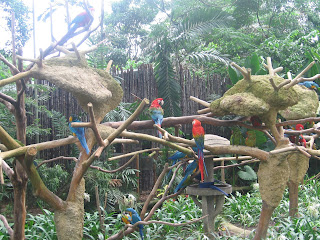 The icing of the cake was the Parrot Paradise. For one, I was amazed by the varieties of parrots. Name a color and there was one in it- Purple, Blue, Red and even Black! As we wandered amongst their cages, I heard a familiar note amongst the cacaphony of their screeches. I went in the direction it was coming from and tried to concentrate. A yellow and green parrot was singing some rhyme that was very familiar. I moved closer and listened carefully. 'Haa-ppp-yyy B-urrr-ttt-daay' sang the bird.  I have seen them do in some shows, but on a hot afternoon, this parrot in a cage was happily singing away to glory. Leave alone V, I myself was terribly excited. Both of us pitched in. In the tranquillity of the greenery all around it was mother, son and a parrot singing 'happy birthday to you' without any care about who was listening to us. Actually we seemed to be the only tourists in that enclosure.

The caged bird seemed to be preaching  "Happiness is the state of your mind, not of your surroundings"

After around five hours, I said to V that we needed to get going. I had been pushing his stroller and was a little exhausted. As I wearily headed to the taxi stand he turned  to me and declared without even an iota of tiredness..."Shall we go to the elephant park ?" I should have thought twice before giving him a name that translated to energy! 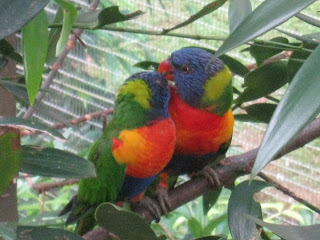 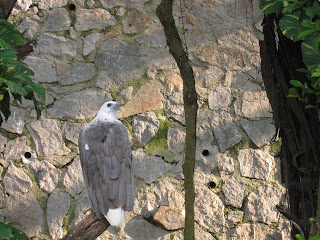 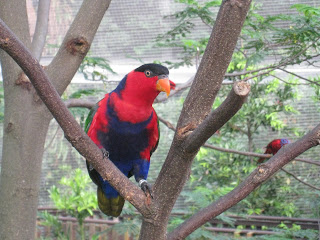 Posted by Jayashree Srivatsan at 1:06 AM