When we were residing at Kuala Lumpur, we never got a chance to explore Langkawi.Now my in laws have come here and we wanted to go on a family vacation. After some brain storming we finalized Langkawi and Penang.

IN SE Asia, Indians get VISA on Arrival in Thailand and Indonesia. But for Malaysia you need to get a social visit pass before arriving, Processing typically takes a week.

Langkawi is a group of nearly 99 islands and is well connected by flights(quite a few low cost carriers) to many parts of the world.

The best part of our stay was the Berjaya resort where we had booked a family chalet. Nestled amongst nearly 70 acres of thick vegetation bordering the ocean, it houses a variety of flora and fauna. The chalets are  made of wood and you need to utilize the 24X7 shuttle service to get from one part of the resort to another.

The board on our room door read 'Please lock the balcony doors before leaving to prevent monkeys from coming inside'. In addition to the room service menu, the hotel had provided each room with a booklet on the varieties of animals present in that forest and what one needs to do in case we encountered a monkey or a python.

During our stay we did spot a couple of hornbills , a few monkeys . One morning we saw an animal clinging to the trunk of the tree outside our room that looked a little like a squirrel and a little like a mongoose and at one angle like an injured bird. We even thought we were imagining things. When we returned in the evening it was still there, but the next morning it was gone. The hotel brochure showed us that it was the flying lemur.

For images of the resort take a look at the hotel website here.

The day we landed we hired a local travel agency to take us on a Mangrove tour, a popular activity there. We were taken at first to a boat jetty by road and then in a speed boat from there.

The boatman skillfully maneuvered his machine as it waddled through beautiful mangrove forests. (Wikipedia:Mangroves are various types of trees up to medium height and shrubs that grow in saline coastal sediment habitats in the tropics and subtropics ) 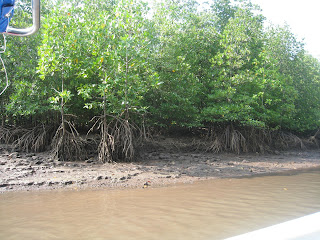 After stopping at a local fish farm , the boat proceeded to the next destination - Eagle feeding.

The boatman threw some pieces of meat in some machine which scattered it in the water and the kings of the skies came charging down in flocks scooping them up with amazing grace and grandeur. In fact Langkawi gets its name from these winged wonders and translates to reddish brown eagle. 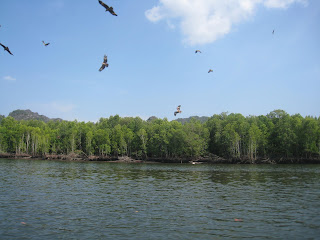 The boat went in through some caves and crevices and then stopped at a place called Gua Kelawar(Bats Cave). 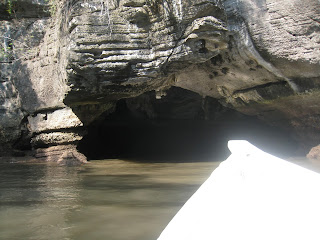 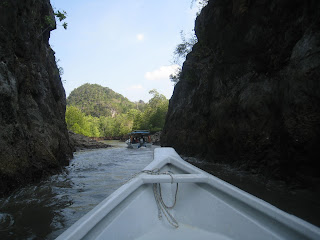 One needs to pay an entrance fee(around RM4) to go in. At the counter they also rent flash lights as its pitch dark inside the cave. We walked along the path carefully and when we directed the flash light above us, the ceiling was full of bats! EIKES!! I wanted to scream out loud and flee but there were boards asking us to maintain silence.In some time we got used to them and they did not seem all that repulsive.We also moved away from the space directly under them. Can you spot them in the pic below? 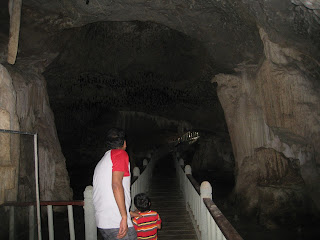 The cave also houses some very beautiful stalactites and stalagmites. In some countries they would give each of them a specific name based on the shape and have a guided tour but here they left all of that to our own creativity. I felt the below one looked like a tiger. Or maybe a snake? 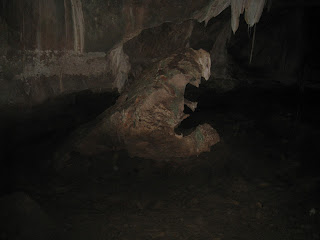 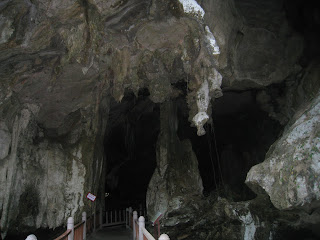 The area around the Bat Cave was teeming with monkeys. One has to be be careful around them as they can snatch your belongings especially if it contains food.  One succeeded in giving me a good scare by making monkey faces at me. How monkey of him!

From there the boat set off again and merged into the Andaman ocean from the swamp areas. Then it was half an hour of super fast boat ride. In the cool evening, with the sea breeze madly blowing our hair, it was a heavenly experience. 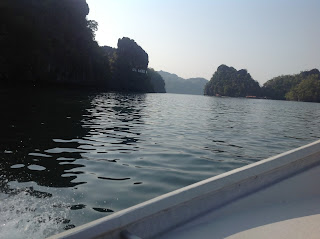 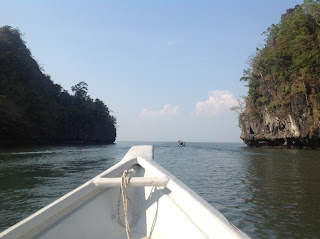 The mangrove trip lasts around 4 hours in all including the road journey and costs around RM300 per boat.


More of Langkawi and Penang in further posts.....

Posted by Jayashree Srivatsan at 5:15 AM