Horse,Fish and a Tiny Art Teacher

I have a disastrous little ball of energy at home that keeps running around wreaking havoc all over the place. This little bundle that bears quite a chunk of my genetic wiring a.k.a my son is an animal world afficionado.

Some of the very first words he started uttering are cat,dog...'Well all kids do that' I can almost hear you comment...Let me complete Rhino,Dinosaur, Elephant, Giraffe and believe it or not Iguana and porcupine.

Sometimes it was disaster, like in front of all our relatives I would ask 'Darling, whats amma's name?' and he would reply without thought 'Rhino' ! That was when he was just learning to talk and did not actually get what I was asking. Nevertheless, damage is a damage is a damage!!

His favorite toys are a set of miniature plastic animals which can keep him occupied for hours at a stretch. 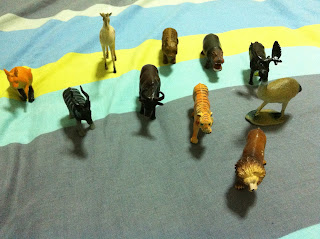 Another of his ardent interests is drawing and coloring. I have a three-year old interiror designer who has uniquely split the walls of my home into two sections, the top half pristine white and the bottom - Well not exactly half, whatever is reachable to his 104 cm height is full of products of his vivid imagination and some abstract art that I am still trying to decipher.

His favorite as of now is what he calls a horse. 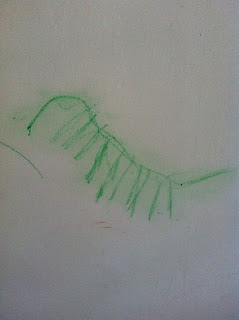 Not just to my 'Oh My SOn Is Such An Artist' proud-mommy's eyes, quite a few people think that it does look like a horse but a modern-art version of it. And yes, it has around ten legs.

I went to a parents teachers meeting and the teacher showed me his worksheets from class. Irrespective of the nature of the sheet - Shapes, Alphabets, etc every sheet bears this trademark symbol of his. There is one sheet which had a white,yellow,blue and red versions of this horse.

What took me by absolute surprise and left me a little open-mouthed with amazement was something he did when we were writing alphabets on his little black board at home.

Nobody actually taught him that. Its something he discovered on his own and taught to dumbo mommy. How to Draw a Fish From an A. I beamed with pride at my 3-yr old little art teacher! 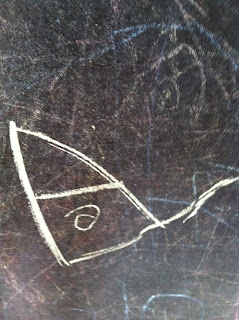 Posted by Jayashree Srivatsan at 9:43 PM