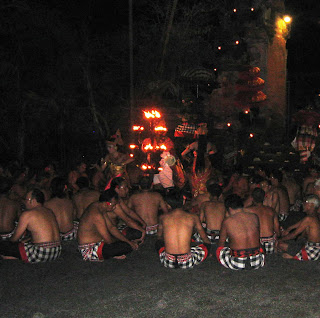 ‘We saw Ramayana dance in Bali’, my friend who was just back from the island had told me. This roused my curiosity and one of the very first enquiries I made during our vacation to Indonesia was about this dance form.

‘Oh! That is the Kecak(pronounce Kay-Chaak) dance. Its about Hanuman and Sita and Rama’ the receptionist at our hotel had explained.

Kecak dance is promoted widely as part of the tourism in Bali and there are daily performances in some places, predominantly temples. We stayed in a place called Ubud and we got to witness this beautiful art form during our first evening there.

At the entrance , they had stacked some print outs in different languages – English, French, German, Spanish etc. containing a detailed explanation of the structure of the day’s play – the order of the scenes, the different characters in them and a gist of the plot to be enacted.

There were no electrical lights at the venue and the entire place was lit up using oil lamps that did not overdo the illumination and gently sprayed a serene radiance all around.

There were around 50 men seated in a circle on the floor, clothed in a checked robe around their waist.

The main background for the dance is provided by the ‘Caka Caka Caka Caka Cak Cak Cak’ (Pronounced Chak) chanting of these men that takes the credit for the name ‘Kecak’.

I was flabbergasted at their energy levels and stamina. For nearly an hour they kept chanting non-stop with a relentless fervor . Their expressions depicted the depth of their involvement and their dedication to the art form; the synergy of their unified voices reverberated all around us.

Then came the lead artists and enacted one scene after another. These actors have a very distinct costume characterized by decorative head gear, heavy make up, lots of jewellery and unique shiny and colorful clothing. It reminded me of some of our Indian art forms like Kathakali and Yakshagana.

Thanks to the print out they provided it was very easy to follow the scenes, given the fact that we have a basic idea about the contents of the Ramayana. The title of the play was ‘Kumbakarna’s Death’.

Scene 3 – Ravana’s son uses his Nagastra (snake-weapon) on Rama and Lakshmana and makes them unconscious. Garuda the bird comes to the rescue

Once this was over, they placed a pile of coconut husks at the center and set it on fire. It was time for the fire dance. The dancer entrusted with the role came charging like a race horse and pranced on the burning husks , sparks flying all around him, his movements scattering the burning fragments all over the place. They gathered them again to a mount at the center and the whole act was repeated. It was mesmerizing.

This was the final act and they thanked us all for being a part of the evening.

As we walked out the performers also started leaving the venue, done with their evening engagement.They seemed to be from all walks of life and apparently the ‘Cak Cak Cak’ was a passionate interest for which they gathered everyday like a game of tennis is to many of us.

Providing a write up for reference before a show is something our dance forms can learn from them and incorporate. Though I could not understand a word of the lyric I thoroughly enjoyed what was being shown. Today if we go to a Bharathnatyam or Kuchipudi concert, except for those who have some basic knowledge about the art form its very difficult to comprehend and appreciate. A similar measure would play a big role in promoting the innumerable art forms we have in our country - a few which need a lot of support to prevent their extinction.

The following is a video I found on YouTube.

Posted by Jayashree Srivatsan at 9:26 PM