I am not very sure in what order I should go about with regards to my posts on Bali...Just pick places at random or go about sequentially describing in a chronological order!
Guess, random is better.
Bali has a version of Hinduism that has been handed down over centuries.The stories and Gods are very similar to the Indian version but the customs unique in their own way.
One thing I observed is that they are very pious people with a firm deep-rooted belief in their religion and customs.
Almost every house, shop or building in Bali including our resort had a structure at the front -A high throne with a cloth wrapped around it and sometimes with an umberella perched on the top. Every day the people place some offerings in the form of flowers or fruits to this high throne. On doing some search on Google on Balinese Hinduism , I found out that it is representation of Acintya, the supreme God. 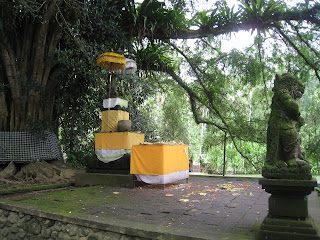 In India especially in the South , there are customs in some parts where some trees are considered as representations of Gods and have turmeric and vermillion smeared on the bark with lamps and incense sticks lighted in front.

I found a noteable similarity in Bali with quite a few such trees being considered Gods with a checked cloth draped around their barks.

There is a temple every few miles called 'Pura' in the local language. The stories from the Ramayana and Mahabaratha are well prevalent and depicted in most of their art forms. You can find Shiv Lingas, statues of Nandi, Ganesha etc interwoven with characters like Dragons. 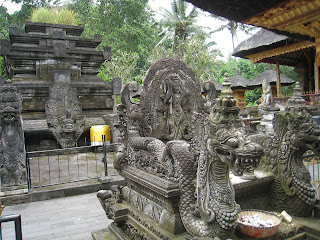 The statues on the road junctions would usually be out of Hindu mythology. One that caught my awe is the one of Rama that I found in Ubud. I have always seen pictures or figurines of Rama in his coronation ceremony with Sita or as a snapshot image with Sita and Lakshman at the sides and Hanuman at his feet.

This one I am talking about is of him in a warrior position about to strike with his bow and arrow quite contrary to his usual representations depicting his kindness and nobility. 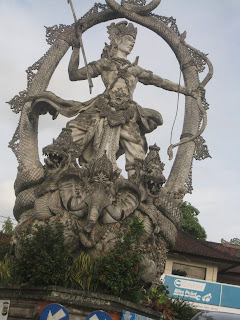 The 3 days that I stayed there , every little to big thing that I came across, which I could relate to what I have seen back home in India gave me a wierd pleasure and happiness....I am not sure what is the right word to describe it. More in future posts.....


Posted by Jayashree Srivatsan at 7:04 AM