Remember the scene in Pardes where Shahrukh Khan takes a deep dive with his feet tied? Yes the Bungee Jumping One! He was all smiles when he did that(Wonder how he managed)...May be that instilled a stupid idea in me?

I am allergic to roller coasters I hate thriller rides at amusement parks...One , I get nausea and two - THEY DO NOT thrill me at all.

This being the case, I really dont recollect where I got this whole idea about Bungee Jumping!!! 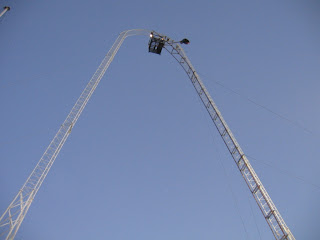 It was a simple 'Day at Six Flags Amusement Park' with friends.
Another mega-thrill amusement center was in the vicinity and one of the options they provided was Bungee Jumping....We could watch every time someone did the act...what looked like Stick figures at that distance jumping down held by a rope and swinging for a few seconds.

'I want to do Bungee Jumping...I have always wanted to do it' I declared.
Initially my friends seemed to absorb it as just one of those statements, we all make, expecting others to acknowledge and move on to the next topic, not taking it too seriously! Something like 'I want to climb Mount Everest some day!'
It did not end there unfortunately!
'Ok, Want to try today?' one of them asked.

When someone dares me like this, sometimes my adrenaline rush takes an unprecedented force and makes me nod my head in agreement before the sanity inside of me is able to control it!
This happened to be one of those occasions.The enthusiasm of my friends soared! To them, I guess it was like a Spanish Bull Fight ! You would not want to do it yourself but still would like to watch the spectacle! Be it the bull or the man who gets killed!! Hmm!

Anyways we all landed at the spot in the evening ......Now it was serious business! My honour was at stake!
I had actually snacked on Nachos and Cheese before that!!! Way too much considering the fact that I was about to go upside down! Fact is when you are super tensed on the inside and smiling with confidence on the outside comfort food does help.

It costed 40 USD to do it. Before paying one had to sign a form that roughly translated to 'I am taking on this craziness on myself at my own accord and if I dont survive its not the company's fault and i take the entire responsibility' . My mom would have kicked me had she known I was signing it but i informed this to her much later ! lol!

Then they measured my weight and asked me to hand over my gold chain as it would fall off. After that my ankles were bound by one of the thickest ropes I had seen in my life.
'Strong Enough?Will this really handle my weight?' I wondered and said a quick prayer to all the Gods I knew.

Then the open lift started going up with me to the spot from where I was supposed to jump.
In the likes of Steffi Graf or Venus Williams just before their Grand Slam final I kept waving to my friends as the lift went up - my heart beat going up exponentially with every feet of ascent!

I stepped out and the sight that met my eye left me speechless for a whole long minute. My total miscalculation and incorrect estimation of the actual height stared back at me. 'OH MY GOD! This damn spot did not look this high from below!' I thought!

My friends seemed to be waving but I could not make out clearly as they appeared as tiny specks from there.The car we had come looked like a replica of the Hot Wheels model I had seen the previous day at the Toy Shop.

The guide at that point, I mean the employee of that Bungee Jumping Company , said 'Hello Young Lady!!! Good Evening' with a brilliant smile. To me he took the form of a mix of Prem Chopra , Amrish Puri and M N Nambiar about to murder the heroine flashing a bloodthirsty smile!

'Its okay Jaish! Let go off your stupid ego and pride!! Just back off now. Tell him you want to go down and not do it' one voice kept telling me in my head.
'Ok, I dont care if I dont survive but I wont survive being the laughing stock' I quitened it and stepped in front. Brave Warrior ready to go to war!

'Do you want to jump forwards or backwards?' CPN (Chopra,Puri and Nambiar mix) asked.
'I am not sure. Which do you think is better?' .
'Well, very few people jump backwards.So I guess thats more scarier' remarked CPN with a tone and expression apt for narrating the story line of 'The Exorcist'.
'Ok' I gulped the scream that rose at the base of my throat!

In any other thriller ride the machine takes care of the thrill. You do not have to push yourself.
In this case, you have to take the initiative and jump on your own.
Almost-Suicide!! Just that your feet are safely secured!


I stepped to the tip of that platform and froze.
Jumping forwards may be less scarier but it was DAMN SCARY!!
I could not jump. I just could not JUMP!! I was at a few hundred feet above ground level!! How could I!!

CPN said "why dont I put my hand in front of you. Then it will be easier" . And he stuck out his villainous hand in front. (Actually he was just being nice and trying to help!!)

A couple of seconds after that have gone into the zones of amnesia in my memory. I am not able to recollect. Did I really jump? Or did CPN grow impatient with this scary-cat-doing-a-stupid-act and give me a shove from behind?

Before I realized I was in the air plunging towards what seemed like oblivion screaming my lungs out!!! I had no idea how my body was swinging or in which angle it was. I was rocking like a pendulum and just saw the sky and different clouds at different angles.

I am not sure how long it lasted.Could be a couple of minutes probably but Einstein's words from a tenth std English lesson rang in my ears
'Theory of relativity is simple. When you sit on a hot stove two minutes may seem like two hours or even two days. But if you are out with a beautiful girl, two hours will fly like two minutes'

I thought I would pass out but luckily I did not - My honour still intact!
Soon the swinging slowed and I got lowered .
And It was Over!Okay! Alls well that ends well!

Now that I was done with the act it was time to bask in the limelight!
After freeing myself of the ropes and collecting my chain, I walked out grinning widely from ear to ear taking powerful strides.Show(Off)-Time!
One of my friends showed me four fingers and asked 'How much is this? Whats your name and address?' Just to make sure that my senses and nerves were intact.
Needless to say, My bungee jumping act and I became the topic of discussion for a few days after that!

I may never do it again I suppose!! That thrill will definitely last a life time. Unless someone dares me and my adrenaline takes over again! :D
Posted by Jayashree Srivatsan at 7:11 AM