There is a city called Thirunelveli in TamilNadu. Ask any Tamilian what comes to mind when we say Thirunelveli and the immediate reply would be halwa.

The city is renowned for its sweet dessert otherwise called "Thirunelveli Halwa".

Halwa is a basically semi solid glossy dessert made with ghee and sugar and some basic ingredient like carrot, wheat flour or semolina.  The aforementioned one from Thirunelveli is made using wheat flour.

In Tamil weddings a commonly served sweet is the Ashoka halwa which is basically made using mashed yellow lentils(moong dal).

We even make halwa with vegetables like carrots or white pumpkin.

The basic ingredient plus the sugar and ghee are cooked on a flame till the right consistency is reached. I recently saw a youtube video where someone transformed left over rice into yummy looking halwa!

I recall a funny story that i read somewhere or saw on TV. There is some situation which warrants a guy to be silent or not give away some secret and so they  make halwa using glue and offer it him. He greedily gobbles it up and his mouth gets stuck. Ha ha! 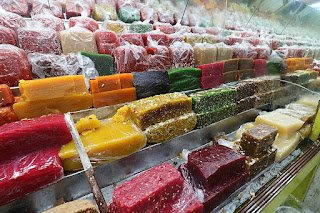 Food from other lands :

Hummus! I am yet to figure out the correct pronounciation for this lovely food item from the middle east. In one of my previous workplaces there was this coffee shop where I would often grab a quick breakfast. My favorite used to be whole meal bread sandwich with a hummus and kale filling. I have not tried making it at home as it needs some additional flavourings like tahini but its on my would-love-to-try list!

For H its not a quote but a single word.

This has been incorporated into many a language in the world as its the standard greeting uttered at the beginning of a phone conversation.

There would always be someone on our minds we wanted to get in touch with or reconnect or just talk to as its been a while.

Sometimes we keep pushing it to a corner of our minds dealing with daily mundane runs. We just click the button and make that call. They would be happy and so would we.

A little care can bring about a lot of happiness!!

Posted by Jayashree Srivatsan at 8:14 PM