Before i proceed i must halt to throw some light on the letters 'zh' that i have mentioned in the word 'Kuzhambu'. It is not pronounced like the zee in zoo or zebra. This phonetic sound is unique to the South Indian languages Tamil and Malayalam. In fact my language is called Tamizh and not Tamil as its widely known. Its close to Rrr and la but unique. Found a video(short one, about 1.5 to 2 mins) on youtube describing it, check it out and tell me if you got it right :D

Coming to kuzhambu , it basically means curry. The word curry is kind of looked at as a single item or flavour in Asian cuisines but these sauces that we have with our rice is of umpteen varieties in each country.

In South Indian food , the base ingredient used to make our curry is something sour like tamarind. The base is usually tamarind extract which when mixed with the right spices  we get a variety of curries.  We have a few variations where instead of tamarind we use sour buttermilk.

Our typical lunch would be some rice served with a kuzhambu, some vegetable and curd. By altering the vegetables and spices and the lentils that go in we alter the menu everyday. 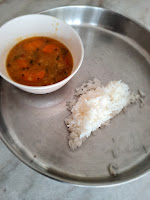 Sambar is the most famous of them all which is gotten by cooking vegetables in tamarind extract and then adding toor dal (lentils) and a blend of spices to it. A plate of steaming hot rice with some onion sambar and potato fry would immediately spring nostalgia of  relaxed family Sunday afternoons to so many of us.

Food from other lands :

I sometimes watch korean drama series . Being a vegetatarian, a lot of food items that are shown are off my palatable list. But one thing i have wanted to taste in its authenticity is the Kimchi which to my knowledge is a sort of pickled radish/cabbage.

Nowadays with kpop and kdrama gaining never before popularity we do get bottled versions in stores but i would like to taste the authentic home made version some day.

Today I will include two quotes as I could not pick one.

It basically means that no matter who it is , even those who are placed lower than you in society, they deserve to be spoken to respectfully . Speak softly and politely to everyone, to even those who serve you .

This is a quote that stresses both on learning and humility.

Katrathu - what we have learnt

What we have learnt or already know is only like a fistful of mud , compared to what we dont know or have not learnt which is as vast as the whole world.

So keep learning, but be polite! :)

Posted by Jayashree Srivatsan at 5:04 PM