When I say Indian food, what most of the globe picturises is what we typically get in Indian Tandoori restaurants. Naan, kulcha, Paneer tikka and so on. But i feel that not many know, especially non-Indians , that these are more related to Tandoori style of cooking which is a method of cooking food in an oven like "Tandoor".

Every state in India has a unique cuisine and the menu is influenced by the key agricultural produce and the weather too.  Typically the southern coastal states are rice eaters and the ones falling above the Tropic Of Cancer are more wheat eaters.

A very common food item in South India is the humble Idly, a steamed dish made using a batter thats 80% rice and 20% lentils(urad dal). 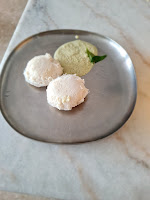 Idly made in the right way is incredibly soft and is very healthy, gentle on the stomach and easy to prepare .  Its typically served with coconut chutney and steaming lentil curry called sambar. The technique and equipment used in the making  of the batter determines the perfection of the outcome. Most Tamil speaking folks to whom cooking at home is serious business will have this kitchen equipment called wet grinder. Two rolling stones run by an inbuilt motor are used to fine grind soaked lentils and rice to make the batter.

This equipment has replaced the manually operated grinding stone that was mostly used in homes earlier.  I have seen in some of the old movies that if one ate at a restaurant and could not settle the bill, one had to make up for it by grinding the idly batter for the subsequent day.

In fact some people in recent days even set up an idly batter making business that was a blessing to people who had no time for the preparation. The thing is , the same batter can be used to make the crepe-like dosa , thicker oothappam etc.  These days, are commercially available dosa batter in tetra packs too.

Food from other lands:

Ice Cream of course ! It is available every where on the planet today and I have no clue about its origins. I don't recall my first icecream. Like most others, it was when I was a very young child, beyond the reach of my memory. I do have memories of us cousins enjoying icecream during the summer holidays, one of the innumerable treats from our grandfather. Earlier the icecream stores sold them in a packed cup or a popsicle format. Chocobar was our favorite though the outer chocolate layer would slide off within a minute once the icecream started to loosen. Later softy icecream stores became popular with a wide array of toppings.

The quote today is from a Tamil movie called Mozhi (language) which is about a girl who is deaf and mute but still leads a very independant life. If you get a chance do watch it.

I dont think i can do justice to the beauty of the lines in my translation but will try !

If the language of nature is understood,

We dont need the languages of humans!

If the language of the heart is understood

Humans do not need a language at all!

Posted by Jayashree Srivatsan at 11:05 PM