Sambar is the South Indian curry cooked with tamarind and lentils. Typically we have it with rice. But its also the main side dish served with our other dishes like idly , dosa etc. By the way many people incorrectly pronounce it as Sam-bur ...its saam-baar ! 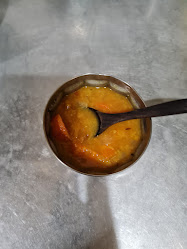 Today for a change i decided to do poetry and my poem is on the Sambar!

The mustards cackle like they picked up a fight;

The cumin seeds join with gusto and equal might;

Breaking into a sweat are the onions sliced thin ;

Shrivelling curry leaves emit the aroma from within;

Into the pot, the red and green chillies make their way;

The tomatoes and tamarind have the final say;

Bravely marches the spice powder with the turmeric and the salt!

Finally mashed lentils do their act of exalt;

Sambar , sambar in the pot !

Slice of heaven when steaming hot!

Food from other lands:

Soups! I  am a big fan of soups and love making them too. Good old tomato soup, brocolli soup, corn soup, minestrone soup, mushroom soup, noodle soup and the list goes on. Soups are an integral part of the local food cuisine in South East Asia.

I don't like canned soup though. The smell of preservatives is too strong and i guess its not a healthy choice.  Initially I was of the belief that soup is just an appetizer thats served along with the main course. Later realization dawned that a rich soup by itself constitute a whole meal.

The Tamil (my mothertongue) saying for today is also from ancient works of literature!

Thirundha - in the best manner or perfect way

I think thats self explanatory. Whatever you do, do it with perfection!

Posted by Jayashree Srivatsan at 4:12 PM