The train that the young wizarding students board to go to Hogwarts on platform 9 and 3/4 is well known to even those who do not fancy the Harry Potter series much .

Growing up in India , the Indian Railway Network was an inseparable part of our lives. India has one of the longest and well connected  railway networks in the world and the organization is one of the biggest employers in the world .

We lived in the state of Kerala and every summer holidays, we would travel to Chennai to my grandparents place by train. It was an overnight journey spanning 12 hours or so.

There would be a magazine stall at the station outside which there would be quite a number of kids pestering their fathers to buy the latest edition of comics for the journey. Peddlers would be selling steaming tea and snacks on trays they skilfully balanced on one hand , using the other for their transactions. Porters in red uniform were labourers that helped people to carry their luggage. The sounds of the train whistle , the vibrating noise made by the moving wheels on the rails and voices shouting tea-kaapi (tea and coffee) strewn with announcements of " Train No 3224, from Calicut to Chennai will leave platform 3 in 5 minutes " in English, Hindi and Malayalam was almost a symphony !

People from all walks of life and all economic classes used the trains and it was the best way to go from one place to another. There are so many interesting people we meet during the journey and there is a term called Rayil Snehidam in Tamil to refer to short lived friend ships. I still clearly remember some of our co-passengers from my growing up years.  They are implanted quite firmly in my memories.

The longest train route in India is apparently the Kanyakumari-Dibrugarh Vivek express and it spans over 4000 km and takes 79 hours to complete the journey .  The maximum I have travelled is only about 24 hours . Maybe someday I should take this longest route just to reminisce the good old days. 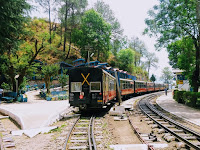 Posted by Jayashree Srivatsan at 6:40 AM