One object that makes an appearance in almost every page of the Potter Series and has a significant role to play in the climax is the humble wand. "The wand chooses its owner" as Rowling puts it.

If only I could repair a broken pair of spectacles or for that matter broken bones with a stick! Wands have a unique constituent at their core like a phoenix feather or a dragon heart string or a unicorn tail hair as in Harry's case.

I think the first time I heard about a wand was in the Cinderella story as a little girl. The whole concept of getting a carriage and a pretty dress and glass slippers at the swish of a wand!!! Its a Oooh! How magical! feeling and quite a girly thing I believe .

A couple of years ago for Halloween(its catching up here as well) my little girl was a garden fairy. She wore a green dress and it was easy to make a wand with cardboard and glittery paper. Five year old girls atleast in this part of the world love tiara s and wands!

I think holding an object like this in ones hand gives a sense of power or authority. Perhaps that is the reason monarchs and kings carried a sceptre in the good old days.( I hope I spelt that one right, the English language and its Cs after the S do confound me). I seriously wonder what exactly is the use of a sceptre other than looking majestic in pictures ( considering the fact that there was no photography at that time)

These poor guys already had clothes that were overflowing and super heavy. Combine the heavy jewellery and crown and on top of that something to hold aloft! Life was not easy for a king!

Another hand held stick I can think of is the mace carried by the leader of the military band. During the band formation, there are some maneuvers done using that including throwing it up in the air. It's apparently called a mace (Had to google that one) .  It kind of adds a finishing touch to the band though it plays no part in the music getting played. Does it help in conducting the show similar to what a conductor does for an orchestra? Oh yes he carries a stick too and that is called a baton, I believe. 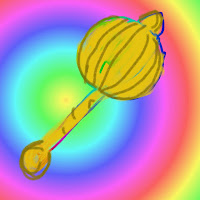 The mace I knew was the English translation of the Gadha a huge solid iron weapon depicted in Indian mythology stories as a a kind of iron ball with a long handle. The warriors in our stories had their own speciality in weaponry. Some were skilled archers as Arjuna and there were those like Bhima or Hanuman who yielded the Gadha. And most of our deities are represented with a Gadha symbolizing protection.

Perhaps a judge is given a gavel for the same reasons. Why not a bell ? A stick in hand portrays authority!

What are your thoughts?

Posted by Jayashree Srivatsan at 5:41 PM