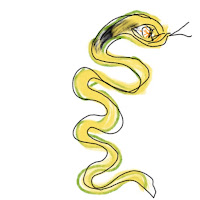 Voldemort or You-know-Who as he is referred to in the Harry Potter books is a ruthless villain with absolutely no conscience. He has his soul split and stored in various things called Horcruxes all of which need to be destroyed to overcome him.

One of his prized possessions is a snake that he calls Nagini. The guy can speak to snakes and this ability is called Parseltongue something that is shared by Harry Potter as well.

Nagini seems to have been influenced by the Indian word for snake i,e "Naag". A cobra is called Naagin in Hindi and "Naaga pambu" in Tamil.

Snakes play a very important role in many of the stories in Hinduism and Indian mythology. We have Aadisesha the multi headed serpent on whose coils Lord Vishnu rests in the milky ocean. The snake Vasuki was used as a rope when the milky ocean was churned by the gods and demons. Lord Shiva has a snake coiled around his neck like a garland!

There are so many temples for snakes where the snake goddess is worshipped.  There are others where there would be snake statues or even mud mounds representing a snake's burrow. There are auspicious days when these snake statues would be worshipped with milk . Many still believe that snakes consume milk though science refutes it saying its biologically impossible for these limbless creatures to do so. My mom and mother in law also follow this practise.

When I was in a town called Erode , there were many vacant plots of land around and snakes were a very common sight. Not the harmless ones but pretty poisonous ones like the cobra. One even visited our kitchen ( I am not joking!)

In one TV documentary I came to know of a farmer who had gone to the forest area to collect some wood. He got bitten by a cobra on his nose.To save himself he took a sickel and chopped off his nose to prevent the poison from spreading.

In Tamil there is an idiom called "Pambum Keeriyum" . Pambu means snake and keeri means mongoose. These two animals are supposed to be bitter rivals. Hence if two people are always at loggerheads with each other , or are strong enemies this phrase is used to describe them .

Todays question...Name one word or movie that immediately comes to mind when I say "Snake"

Posted by Jayashree Srivatsan at 3:41 AM