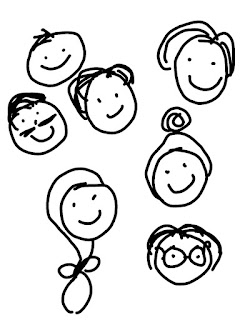 Ghosts can be scary and spooky and can be used to create horror but they are quite a common appearance at Hogwarts School of wizardry in Harry Potter. In fact some of them have very unique names . There is Moaning Myrtle , a woebegone girl ghost , Nearly Headless Nick, the Gryffindor ghost and one of the teachers Professor Binns who teaches them history.

Nearly Headless Nick is called so because his neck is not completely severed and  a small part of his head still attached at the base. Poor fellow , for this reason he is unable to join the fun activities at the annual Headless Hunt as they only accept ghosts that had lost their heads totally.

Speaking of heads there is a huge three headed dog Fluffy if I recall the name correctlt that makes its appearance in the first book and falls asleep when music is played.

Having multiple heads or hands is a common depiction of the gods and goddesses in Indian mythology.  It's sometimes symbolic of a more inner philosophical meaning but on a superficial level it's quite interesting.

There are childrens tales in India about a person called Tenali Rama who was the court jester of one King Krishnadeva Raya . These stories are amusing and combine wit and wisdom.

There is an interesting story that I have read about him as a kid. Once when he was asleep in a temple , Goddess Kaali appeared before him and she had a hundred heads.

On seeing the goddess instead of bowing to her or asking for some blessing , he started rolling on the floor  with uncontrollable laughter . The goddess was annoyed but curious about his behaviour. When asked what was wrong he replied " If I catch the nasty flu, I have such a hard time for a whole week. If you catch a cold I wonder what you go through with that one hundred heads of yours! Ha ha ha "

He was given the name vi-ka-ta-ka-vi by the goddess that's a palindrome and means poet of great wit.

Posted by Jayashree Srivatsan at 4:01 AM