Unicorns appear in the very first of the Potter books. Voldemort who does not have a form yet and is housed on Professor Quirril's head uses him to kill a unicorn and drink its silvery blood as it is supposed to keep alive anyone on the brink of losing his life. But killing a pure and defenseless animal would result in a cursed life.
Harry Potter has a unicorn hair as the core of his wand and hence it's one of the finest . 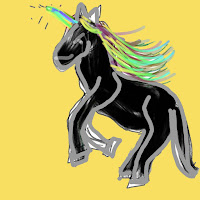 I always felt that black stallions look pretty majestic but somehow these one horned horses are always depicted in white colour and they are supposed to be a dazzling white. I wonder why no detergent companies have a unicorn for a logo!
Recently I heard about a tiny black hole that has been discovered in space and has been named the unicorn.  Usually when something is a rare occurrence it gets such a name .
It was recently that I came to know that a term called unicorn company is becoming widely used in the business world. Apparently a privately held startup company valued at more than a billion dollars is called by that term.
During one of my trips to the Underwaterworld aquarium I saw a white fish with a horn like projection on its forehead. I thought it looked like a unicorn and then came to know that it bears precisely the same name . "Unicorn fish"
I used to play a game with my kids where we used to name one animal each for every letter of the alphabet. We usually used to get stuck at U. After this trip we had a new one to add to our list . Now my son tells me there is a Ulesseus butterfly for U.
Do you know any other animals that start with U ? I may have missed a common one too !!
Posted by Jayashree Srivatsan at 4:36 AM